Is Marijuana Addiction Real? Marijuana Use Disorder Side Effects

Marijuana is one of the most popular and widely available mind-altering substances in the United States and the world. When used as a drug, it comes from the flowers of the Cannabis sativa plant which are harvested and then dried. These flowers (often called bud, nugs, weed, pot, herb, etc.) are usually broken down then smoked. However, now more than ever, cannabis is available through a wider variety of products marketed to casual and chronic consumers. Many of the well-known marijuana products include extracts in vape or e-cigarette devices, baked treats, sublingual tinctures, body creams, and even drinks such as teas or juices.

With the recreational and medical legalization in more states across the country, there is a higher demand for marijuana in all forms. Such demand and availability raise the potential for easier, frequent access. Therefore, it could be argued that dependency is rising and the risk for Marijuana addiction continues to spike.

The primary chemical compound found in Cannabis is tetrahydrocannabinol, otherwise known as THC. There are over 400 compounds within the plant, only about 60 of which are known and identified. The cannabis plant has been one of great mystery and controversy for many generations. About one hundred years ago it was likely that most doctors had some form of cannabis medicine to treat all kinds of ailments in their patients. However, as the public began to experiment with marijuana as a recreational drug, governing bodies decided to outlaw it as a substance. Why did a then natural medicine become outlawed, exactly? The underlying motives are not known for sure, but Marijuana eventually became labeled a Schedule I substance. Schedule I means that it has a high risk of abuse and no approved medicinal benefit in the United States.

Both scientific studies and marijuana enthusiasts alike confidently claim that marijuana is not physically addictive. Although marijuana, like any substance or vice of comfort, can be habit-forming, there’s little evidence that it’s addictive throughout the body. If anything, it is known for being psychologically addictive: meaning the user feels a need to consume weed on a regular daily basis in order to feel normal.

Additionally, there is adequate proof that shows the human brain actually contains an endocannabinoid system, which cannabinoids from the cannabis plant naturally bind to. Different people have different levels of naturally-occurring cannabinoids within their brain which attach to receptors that affect inflammation.  This evidence continues the wonder and mystery many people have about cannabis. But, it doesn’t mean every use of marijuana is all good and risk-free.

Even though some people might be able to smoke and use Marijuana for personal reasons without issue, there’s no doubt that it also carries the potential for marijuana addiction. 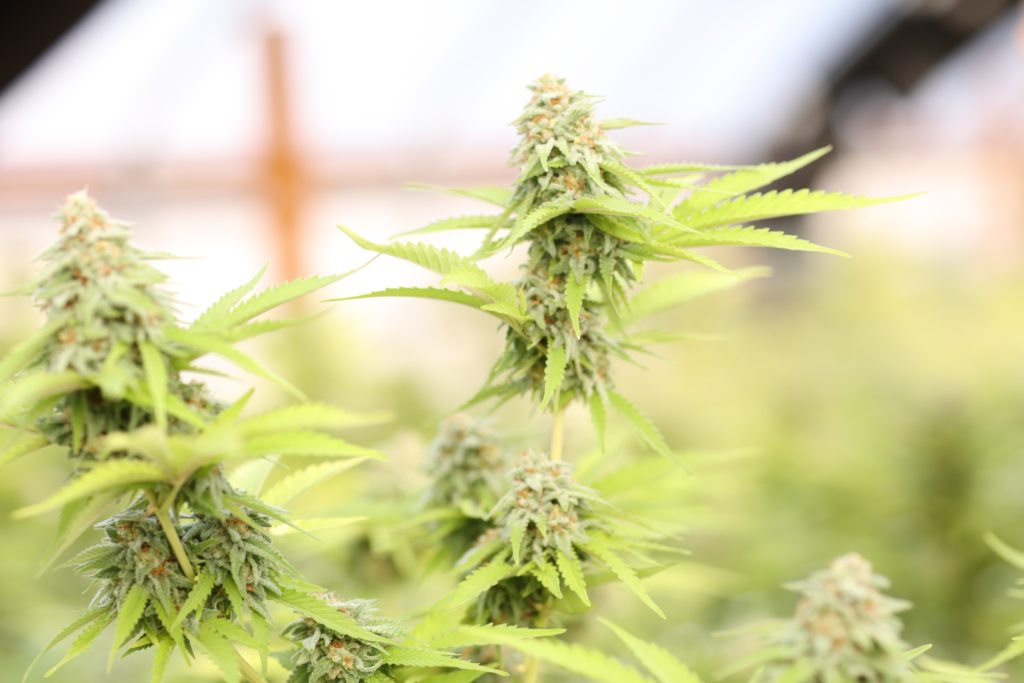 Isn’t weed a natural plant medicine? How is Marijuana addictive?

Indeed there is more and more science that Marijuana in certain doses can have medical benefits, including relief from the side effects of chemotherapy in cancer patients. Some research up for debate also claims that different chemical compounds in cannabis can have healing effects on the body, even to the point of shrinking cancer cells. However, as mentioned before, there are hundreds of compounds in the plant, and THC– the part that makes people who use cannabis feel that “high”– is more known for offering pain relief. Hence many patients who use marijuana medically often have a valid reason in doing so.

Another increasingly popular compound is CBD, or rather, cannabidiol. CBD is subtle but beneficial so far as studies show. The interesting thing about CBD is that it is not psychoactive on its own– in other words, it cannot give anyone that “mind high”, as THC does. Some individuals who use CBD report experiencing muscle relaxation, less anxiety, a decrease in inflammation, freedom from epileptic seizures, and symptom relief from autoimmune diseases such as fibromyalgia and Lupus. CBD is not as studied yet as THC, but so far there is no indication of it being addictive.

Despite all of the perceived benefits, there are still plenty of people who misuse and abuse marijuana in both recreational and medical situations. It is likely that you have known someone or cared about a friend who could not seem to function without smoking weed every day. Many teenagers find pot appealing as it’s a fun, exciting, and social means of escaping the pressures of society and sometimes tuning in to “deeper” aspects of the self. Of course, many young people gravitate to marijuana, especially because of how glamorous and taboo it continues to seem in many communities today. And although it’s up to personal preference whether or not, how, or why to try a mind-altering substance, there’s always that precaution to consider. As good and helpful as something might seem, to the same extent it can be detrimental and cause negative consequences.

Temporary Side Effects of Marijuana

In this section, when we refer to “marijuana” we are referring to the side effects of the plant that contain THC, which users seek out to feel high or temporary relief. The immediate feeling is caused by receptors’ reaction to dopamine in the brain. Here are the main side effects that are initially seen from marijuana use:

Sometimes there are adverse immediate side effects, usually when someone doesn’t react well to THC or in instances where too much marijuana is used. These include:

Are There Any Long-Term Side Effects of Marijuana?

Probably the number one long-term effect from someone with a substance use disorder or marijuana addiction is found in the lungs. With chronic smoking, even though marijuana doesn’t contain tar or nicotine like cigarettes, inhaling smoke and combustion of plant particles still wreak havoc on the lungs. Longterm weed smokers could have coughs, bronchitis, or diseases from Aspergillus, a type of mold sometimes found on poorly processed buds. Lung and respiratory complications are especially true for users who frequently smoke marijuana concentrate called Butane Hash Oil (also known as oil, B.O.H., or “dabs”).

Another increasingly seen downside to long-term marijuana addiction users is a condition called Cyclical Vomiting Syndrome (CVS for short). Almost all studies of this condition related to marijuana use claim it’s a result of Cannabinoid Hyperemesis Syndrome.

CVS is an episode or recurring condition where the user goes through unbearable bouts of vomiting, nausea, and abdominal pain. Many people who go through this claim the only thing that provides relief is spending time in a hot shower or bath. Doctors theorize that long-term overuse or marijuana slows down the proper function of digestion and gastrointestinal processes, hence causing such a negative reaction in the body.

Extended marijuana abuse can also seem to change the brain over time. Not only does it play a major role in how dopamine functions, but it can also alter how individuals relate to others on an emotional level, too. While some people who dabble in occasional mild cannabis use claim to feel a calmer, closer relation to people, chronic use can lead to apathy and social isolation.

A notable result in constant pot use is a change in normal dopamine regulation. Marijuana offers a longer period of the brain’s “reward” center from dopamine levels changing. Several celebrities have gone public about their decision to stop their daily pot use because of this same issue. Most recently wat Miley Cyrus when she said she chose to quit using marijuana because she wanted her mind to be fully clear.

Signs of Marijuana Addiction and Dependency

So how can you tell if you or someone you’re in a close relationship with has developed a marijuana addiction? The obvious sign is that he or she does not or cannot seem to go without consuming marijuana. If they need to abstain or take a break, they do so with many complaints and excuses for why they need to smoke.

Here are some more of the likely signs of someone with a marijuana addiction:

Are there Symptoms of Marijuana Withdrawal?

For someone who has been frequently using weed on the daily, there could be some signs and symptoms of withdrawal. Even though technically cannabis isn’t physically addictive, there are negative and uncomfortable feelings that come after quitting an excessive pot habit.

For someone recovering from marijuana use disorder, it’s important to stay hydrated, physically active if possible, eat regularly, and try to manage restlessness. The usual timeframe for this “withdrawal” phase can last for a few days, up to several weeks.

The good news is, it is extremely difficult to experience an accidental drug overdose from marijuana, compared to other drugs.

How Long Does Marijuana Stay in Your System?

Because the THC in marijuana is fat soluble, it remains in the body for a longer period of time than many other drugs. It is stored in the fat cells of the body, so varying personal factors such as weight, height, metabolism, activity, and diet can determine how long it stays in your system or will show positive on a drug test.

One-time or occasional pot use could remain in the system for ten days to several weeks.

Chronic weed users can expect THC to remain in their systems for several weeks up to 90 days.

Another thing to consider is what type of bodily fluid is to be used during the drug test. There are urine, blood, saliva, and hair drug screenings which are most common. Each type of test can read THC in the system for varying timelines. Usually, urine tests and blood tests are done for marijuana detection.

What Should I Do if I Have a Marijuana Addiction?

So, the final verdict: is marijuana addictive?

From a botanical view with a science perspective, no. Cannabis is not addictive.

From a human behavioral perspective, however, frequent use can most definitely result in marijuana addiction, whether you’d like to admit it or not.

If you or someone you know has a marijuana use disorder including any of the side effects mentioned in this article, feel free to reach out for help. There are ways to overcome this addiction and find ways to live a fulfilling life sober from drugs. If you need help, reach out to the Addiction Helpline at Prevail Intervention. We help thousands of families see successful recovery all over the country. And you can be the next person to break free from long-term addiction.

Marijuana for Glaucoma: A Recipe for Disaster or Treatment? (2015, Yale Journal of Medicine)

Potency increase, product development, and marijuana marketing in times of legalization (2017, Society for the Study of Addiction)

Top Seven Books About Addiction & Sober Recovery
What You Need to Know About Getting Help For Addiction
Know the Signs of Accidental Drug Overdose
Yoga of 12 Step Recovery: A Mind/Body Approach to the 12 Steps
How to Better Understand Coping with Addiction
How Does Peer Pressure Affect Drug Addiction
Categories