Is It Possible to Have a Dependency to Ecstasy Pills

Clinically referred to as MDMA (3,4-methylenedioxymethamphetamine), Ecstasy, is widely known as the original designer drug because of its high profiled standard. It can be linked to pop culture from as early as the late 80s to the present day. Ecstasy is widely popular among the younger generations who party a lot. MDMA is a well-known party drug as people typically use it to feel more energetic, happy, awake and be able to dance for long periods of times. This hallucinogen takes about 30 minutes for its effects to start taking effect and lasts for up to 6 hours.

Ecstasy is also referred to as “the love pill” as it enhances the users’ sense of sound and color and is said to also boost one’s sensation of touch, especially during intercourse.

This drug also has high concentrations of hallucinogens – these are drugs that play mind games with the individual under the influence causing them to see things or people that aren’t really present It may even cause some users to start hearing voices in their heads. In a negative experience, hallucinogens can cause a person to go into a state of paranoia. After effects can result in extreme depression and even cause the user to remain in that state without them realizing how bad it is.

Ecstasy can cause drastic emotional damages to its abuser and cause them to encounter symptom such as depression, paranoia and engage in complete psychotic behaviors.

Ecstasy works by affecting the serotonin pathways in the brain. This is why it’s generally known for causing happiness, euphoria, and blissful sensations. It typically affects the chemicals present in the mind by raising certain levels of serotonin, dopamine, and other neurotransmitters that change your way of thinking, judgment and overall reactions to everyday life. Therefore, the comedown off of ecstasy can cause a significant decrease or even depletion of these neurotransmitters. Results can be harmful and imperative.

Symptoms of MDMA taking effect include:

Other symptoms include vision impairment such as blurred vision and lack of judgment, chills, intense muscle cramps and involuntary clenching of the teeth. Some of these symptoms are also a result of many of often unknown sources of MDMA containing other drugs, such as heroin, cocaine, or even traces of meth. 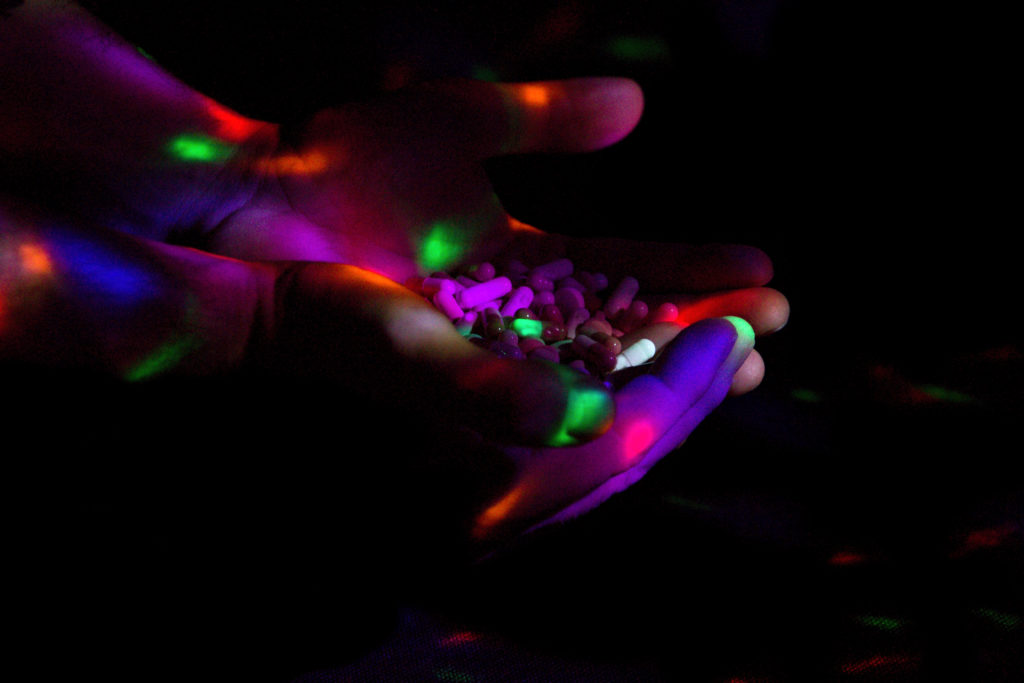 It is still unsure if ecstasy can be addictive, but research is still further emerging on ecstasy addiction. Although science is still uncertain about the pill’s addictive properties, it can still be habit-forming. Also, ecstasy can yet definitely have the potential for abuse. Many party goers and young adults who enjoy going to dance clubs can depend on ecstasy to feel like they’re having a good time. Furthermore, dosage may need to increase over time for the user to still feel its same effects. Again, this depends on the person taking ecstasy. Taking more massive doses can be potentially dangerous, as it takes a lot of work for the liver and kidneys to process.

What puts Ecstasy users (and abusers) at more risk of this standard “designer drug” effects is that it is almost never sold entirely pure. Whether it is obtained as a pill, capsule or powder, there is a 95% chance that it is laced with other drugs such as cocaine, meth, over the counter pain medications, bath salts, and much more. If you or your loved one taking this drug is not aware of the substances that this drug contains, that is when it becomes even more dangerous. Persons who unknowingly, or also purposely combine this designer drug with other drugs including alcohol, put themselves at a higher risk of an overdose or the development of severe health problems.

Health effects on overdosing off of this specific drug may be even more extreme than it is with other drugs. This can happen when the user takes more doses than needed at one time. Some people might take more doses following the initial dose to maintain the desired feeling. This habit is generally called “piggybacking”.

Harmful results of piggybacking can require immediate medical help. The symptoms of such overdose include:

More extreme cases of an Ecstasy overdose include deaths by heart failure and heat strokes. Since this specific drug hides the user’s need for daily essentials such as food, water and even rest, it increases the level of physical activities and energy level. In rare cases, it has also been linked to death caused by starvation, dehydration as well as total depletion.

Treatment for Addiction and Withdrawal

When the user finally realizes the harms that he or she is putting themselves in and is ready to sober up, their phase of ending their battle with drug abuse begins. They will likely better be dealt with in a rehabilitation facility where medical professionals can assist them. Rehab or inpatient treatment can help with a smooth detoxing process. That is, getting the toxic drug entirely out from their system.

Unfortunately, this period could entail a series of withdrawal symptoms. Withdrawal tends to be both physically and mentally uncomfortable. Such symptoms may intensify. However, the intensity of withdrawal is dependent on each unique user. Factors like how frequent, and how many doses the user has been taking all come into play.

Treatment will often also include a series of mental therapy. Psychological therapy allows both the medical professional as well as the former abuser to understand the mentality behind why they started to take the drug in the first place. It’s helpful to understand the nature of addiction and assess ways to avoid relapse.

If you or your loved one is struggling with an Ecstasy abuse, please get immediate medical help. What was once a fun and simple party drug can have harmful effects on the user. If the individual experiences addiction, it can have negative effects on loved ones around them.

If you or someone you know needs healing from the damaging effects of ecstasy, call Prevail Intervention. We can find the right treatment and support you need. Contact our free 24/7 addiction and mental health helpline. You can talk to someone personally about any questions or concerns you may have.

What Are the Signs of Percocet Addiction
Prescription Drug Abuse: Who’s to Blame?
What is the New Opioid Addiction Bill?
Categories